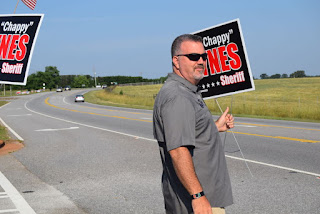 The photo on the story pretty much tells you everything you need to know about this race.

May 26, 2016
Tree-fall accident damages Mars Hill Road yards: Kelly and Rita Huff had come to terms with the ecological changes that the widening of Mars Hill Road was bringing to their well-kept yard.
Post a Comment
Read more

May 25, 2016
In the highest-profile race on their local ballots, Oconee County
voters returned Sheriff Scott Berry to office for a seventh four-year
term Tuesday, choosing him over former Oconee County Reserve Deputy
Kevin “Chappy” Hynes by a decisive margin.


Berry and Hynes ran as Republicans, and there were no Democratic
candidates, so Berry will once again assume the sheriff’s office in
January.


Berry, who said Tuesday night that the term he won handily will be
his last as sheriff, earned 4,448 votes in the contest, for 69.6 percent
of the 6,389 ballots cast in the race.


Hynes captured 1,941 votes, or just over 30 percent of the votes tallied in the contest.


“Seven times, Oconee County has selected me as their sheriff, and I appreciate that,” Berry said Tuesday.


Looking forward to his upcoming term in office, he said he wants to
establish a clear career path for deputies and to take care of at least
some of the department’s equipment needs.

The men are still in command in Oconee County

May 24, 2016
Novene Landers, 84, of Hillcrest Drive, reportedly drove her car into
the intersection of main Street and Hardin Hill Road at about 4:40 p.m.
when the vehicle was struck in the driver’s side by a Walton EMC bucket
truck.


Landers was pronounced dead at the scene.